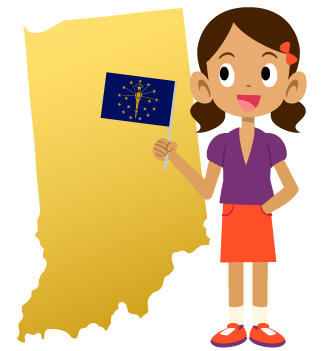 What is the state of Indiana known for? When did Indiana become a state? These and other questions are answered in our Indiana history timeline and throughout this unit study supplement.

Indiana is a midwestern state with a name that is thought to mean “land of the Indians.” Indiana is known for manufacturing steel, automobiles, medicines, hardwood furniture, mobile homes, electrical products, and caskets.  Agriculturally, the state is one of the top producers of corn, mint, and soybeans, along with tomatoes and watermelon, hogs, dairy products, turkeys, ducks, and sheep. Mining is also important as Indiana is a major producer of limestone (a material used in construction).

In this article you’ll learn interesting facts about Indiana, including historical facts about Indiana, an Indiana history timeline, geography facts and more. Time4Learning members can download our list of PreK-12 interactive activities that align with your study of Indiana.  Here are a few Indiana facts for kids:

Indiana has a rich history. For thousands of years, numerous indigenous peoples and Native Americans lived in what is known today as Indiana. Among them were the Shawnee, Miami, and Illini. Eventually tribes from eastern regions including the Delaware moved into the region. Between 1,000 AD and the 15th century, right before the Europeans arrived, the Natives in the region had created large settlements with mounds and plazas. One such settlement was Angel Mounds.

In 1679, the French explorer, René-Robert Cavelier, sieur de La Salle, explored the region at the St. Joseph River. Soon thereafter, French-Canadian traders arrived. The increase in trade led to the first trading post to be established near Vincennes. As fur trading continued to grow in the area between Native Americans and French Canadian settlers, British colonists started to arrive. As a result, the British and the French began fighting over control of the lucrative fur trade.

As tensions escalated the French joined forces with the Native American tribes of Indiana during the French and Indian War in 1754. In 1763 as the British came out victorious, the French were forced to cede all lands east of the Mississippi River and north and west of the colonies. The Native American tribes however did not give up, and later that year the British crown designated the land west of the Appalachians “Indian Territory”. This proclamation excluded British colonists from the area.

Indiana was later ceded to the newly formed United States after the American Revolutionary War through the Treaty of Paris. Once under US control, the Michigan Territory and the Illinois Territory were formed, reducing Indiana to its current size and geography.

Land titles started to get issued in the region and European settlement in the area slowly began to rise. This led to the Shawnee and other indigenous tribes resist European settlement. The disputes culminated with the Battle of Tippecanoe where the US gained victory. Shawnee tribal chief Tecumseh, leader of the rebellion was killed in 1813 during the Battle of Thames. After that, most Native American tribes were removed from the area to the west of the Mississippi River in the 1820’s and 1830’s after the US purchased their lands.

In the Indiana history timeline below, you’ll learn more Indiana facts and information about the state’s historical events.

First trading post near Vincennes is established by Sieur Juchereau

French built Fort Vincennes, one of the first permanent white settlements west of the Appalachians, in order to protect their trade route from settlers arriving from the south

British colonists win the French and Indian War. The Indiana region gets ceded to the British crown. The crown designated the area “Indian Territory” and forbade further white settlement.

Connecticut, Massachusetts, and Virginia made claims to the area during the American Revolution

US acquired all lands west of Pennsylvania, north of the Ohio River, east of the Mississippi River, and south of the Great Lakes through the Peace of Paris treaties

First US settlement was founded at Clarksville on the Ohio River

Battle near Fallen Timbers, where General Anthony Wayne defeated the Native Americans near the Ohio border

The old capitol building was constructed in Vincennes

Battle of Tippecanoe, the last major battle between US troops (led by General William Henry Harrison) and the Native Americans

Indiana became the 19th state in the US, under President James Madison with Corydon as the capital

State capital is moved to Indianapolis, after the delegates voted to move the capital there

Pullman Strike, a railroad strike and boycott that disrupted rail traffic in the Midwest for two months, led by Eugene V. Debs and partially resulting in the creation of Labor Day

Steelmaking city of Gary was established

There are all sorts of flora and fauna in Indiana. Among the most common animals are the cardinal (the state bird) which lives in Indiana year-round, bobcats, muskrats and more. Throughout Indiana you’ll find the tulip tree (the state tree) which is also known as the yellow poplar. Yellow, bell-shaped flowers bloom from this tree. Sycamore, eastern red cedar and white oak are also widespread trees in Indiana.

Limestone is an important natural resource in Indiana. It is heavily quarried in the state and has been used in the construction of buildings such as the Empire State Building and the Pentagon.

Indiana’s land has been largely modified by glaciers, leaving rich soil and deposits like sand and gravel.  Along the Lake Michigan border lies the Indiana Dunes, sand dunes that were largely decreased by industry and private homes until 1972 when the area became the Indiana Dunes National Lakeshore.

Indiana’s location and geography result in mild temperatures through the four seasons, with slightly more extreme temperatures and greater snowfall in the area near Lake Michigan.  Indiana, however, does have severe storms in the spring, including high numbers of tornadoes.

Check out this map of Indiana to start getting familiar with the state. Then read through the following Indiana geography facts and print out the map of Indiana provided below and add these items to the map.

Download our FREE Indiana state map printable. Use it as a coloring page or use it to plot the state’s geographical features.

Activities for Children in Indiana

Want to take learning fun facts about Indiana even further?  Visit one or more of the state’s unique sites. Homeschoolers in Indiana can plan a day trip while out-of-town visitors can stay and see several interesting places. Here are a few ideas to help you learn some Indiana state facts:

Looking for more things to do with your kids in Indiana? Check out this post full of field trip ideas in Indiana!

Indiana Freebies and Deals for Homeschoolers

You can learn more interesting facts about Indiana’s history and geography without much cost.  Below are just a few ideas:

Now that you know some interesting things about Indiana, test your Indiana facts knowledge with these free games and activities: 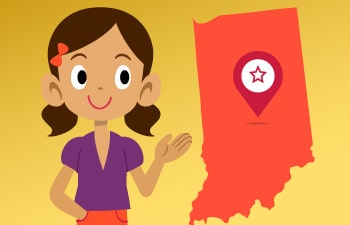 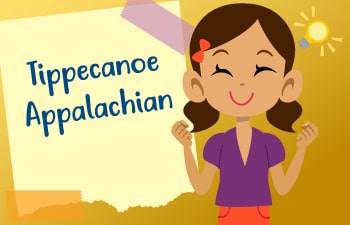 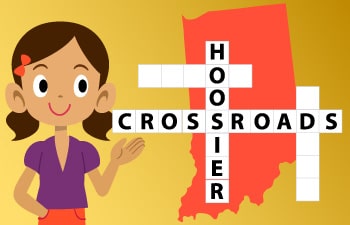 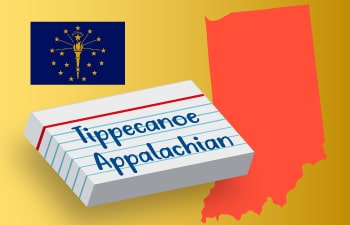 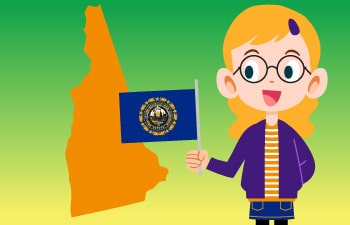