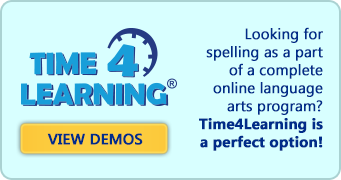 When teaching spelling to students, use each week to focus on one convention or phonics-based rule at a time. Practicing a weekly rule along with a corresponding list of 5-20 words allows students to grasp the concept before moving onward and leads to better reading fluency, spelling, and writing skills.

Time4Learning provides integrated grade-level spelling lessons in our language arts curriculum, plus age-appropriate spelling lists for parents to appreciate the levels for each grade with thematic conventions. Read on for more about these key ideas and conventions.

Abbreviations: The shortened version of a word (Ave.=Avenue).

Acronyms: Phrases that are abbreviated by using letters from the phrase (NASA = National Aeronautics and Space Administration).

Affixes: A part (morpheme) attached to the root word, such as a prefix or suffix (Unimaginable, reheat)

Beginning Consonant Digraphs: Two consonants at the beginning of a word that when joined make one sound (chair, shirt).

Consonant Blends: Consonants that when joined together can produce the sound of each consonant (flow, cradle, speed).

Dolch Words: A list of the most commonly used words, comprised by E.W. Dolch in 1936, which are generally learned as sight words (the, it, was, I).

Ending Consonant Digraphs: Two consonants at the end of a word that when joined make one sound (march, swish, path).

Etymology: The history of language through the study of word origins.

High Frequency Words: The most commonly used words in print (the, a, to, I).

Homographs: Words that are spelled the same, but have different meanings and pronunciations. (bass, bow, close, desert)

Homonyms: Words that have the same spelling and pronunciation, but varying meanings (spruce as in to clean or spruce as in a type of tree).

Homophones: Words that sound the same but are spelled differently and have different meanings (here and hear, see and sea).

Inflectional Endings: The combination of root words and endings to indicate a plural or verb tense (stars, played, running).

Prefix: The beginning part of a word that precedes the root word (precook, undo, resend).

R-Controlled Vowels: Vowels that when placed next to the letter r, take on the r-sound as a blend (car, bird, her).

Root Word: The part of a word, giving it meaning. A prefix or suffix can be added to it. (reread, swimming, sounded)

Short Vowels: Single vowels usually make a short sound and appear between two consonants (cat, bed, hid) or in the beginning of a word (at, us, ink).

Sight Words: Words that are commonly used, but may not follow phonetic spelling rules, and as a result are frequently learned through sight memorization.

Suffix: The end part of a word that follows the rootword (happily, enjoyable, referral).

Syllables: The phonological organization and segmentation of words in parts (hap-pi-ly, en-ter-tain-ment)

Vowel-Consonant-E: Spelling with a vowel, followed by a consonant and the letter /e/ to give a long vowel sound (cake, mine, rope, dune)

Vowel Digraphs: Two vowels joined together to make one sound, usually the sound of the first vowel (coat, team, paid).

Vowel Diphthongs: A pair of vowels that when joined, create both sounds (boy, cow, paw, coil).

The language arts is GREAT for helping with phonics and beginner reading skills... Plus, the lessons are thoroughly entertaining! 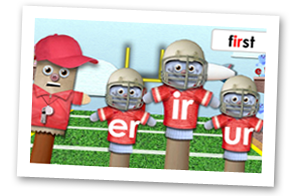