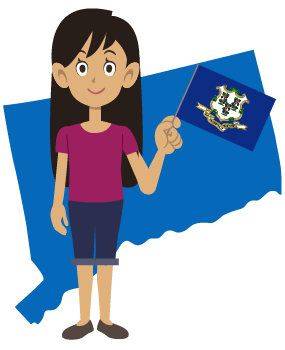 On January 9, 1788, Connecticut became the fifth of the original colonies to join the United States, and we’ve prepared you this homeschool unit study supplement just in time for Connecticut’s anniversary. Whether you live in Connecticut or are simply interested in the “Constitution State,” we’ve collected information about its history and geography for you to use as part of your homeschool state unit study.

You’ll also find educational destinations in CT, perfect for planning field trips with your homeschoolers. Once you’ve studied all the interesting facts about Connecticut, put your homeschooler to the test with fun learning games and other activities about the Nutmeg state. Combine this with Time4Learning’s full series of United States unit study supplements to teach your homeschooler the rich history of our country.

Are you ready to find out what important reference book was first published in Connecticut? Want to know how many miles of river wind through the state? Then let’s get started learning! You can also download our list of PreK-12 interactive activities that align with your study of interesting facts about Connecticut.

The word Connecticut is derived from a word that the Mohegan tribe had for the long, winding river that flowed through the area that is now Connecticut: “Quinnehtukqut.” For thousands of years, the Mohegan were the only inhabitants of the area until English Puritans created a settlement there. The first European explorer to discover the Connecticut area was Dutchman Adriaen Block in 1614. While under Dutch rule, the area was part of the Dutch colony called “New Netherland.” In 1636, Connecticut officially became a colony. Chief trade and enterprise in the Connecticut Colony included whaling, fishing, shipbuilding, fur trading, timber production, and maple syrup.

Because of its structural government document of 1638/1639 called “The Fundamental Orders,” Connecticut got its nickname as “The Constitution State” for having the first formal state constitution in the Western world. Connecticut was the fifth colony to become a state on January 9, 1788.
At one point, there were two different capitals: Hartford and New Haven. Hartford eventually became the single state capital in 1875.

In 1784, Connecticut begins the gradual abolition of slavery, which became fully outlawed in 1848.
Many abolitionists lived in CT during the anti-slavery movement of the 1800’s, including Harriet Beecher Stowe and John Brown.

To increase your child’s love for online learning, they can study the timeline which includes highlights of important dates in the history of the Constitution State as well as interesting facts about Connecticut.

The Connecticut Colony was established by Thomas Hooker.

John Haynes becomes the first governor of the state.

The Connecticut Courant, the oldest newspaper in the U.S., was launched.

Four delegates from the Second Continental Congress signed the Declaration of Independence on behalf of the state.

The Battle of Groton Heights during the American Revolutionary War took place.

Connecticut is the fifth colony to become a state.

Oliver Ellsworth and William Samuel Johnson become the first senators of the state.

Ella Grasso becomes the first female governor of the state.

While there are plenty of Connecticut facts for children that highlight the history of the state, you’ll want to make sure to cover important facts about Connecticut’s geography, too. Exploring a map of the state will help a lot, then download our printable Connecticut map and mark it up with your child! Here are just some of the things you may want to explore and mark on your map. 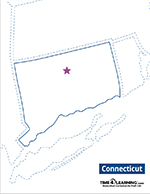 Download our FREE Connecticut state map printable. Use it as a coloring page or use it to plot the state’s geographical features.

Educational Places of Interest in Connecticut

One of the best ways to energize any state unit study is by adding hands-on activities. Do you live in Connecticut? Or perhaps you will be traveling to the state in the near future? Homeschooling families will discover plenty of interesting things in Connecticut that are perfect for field trips. Here are some ideas for day trips where you can experience Connecticut’s history and geography for yourself.

Want to extend your Connecticut unit study even farther? The following learning resources will introduce you to even more fun facts about Connecticut and will also give your homeschoolers the opportunity to test their knowledge of what they’ve learned so far. 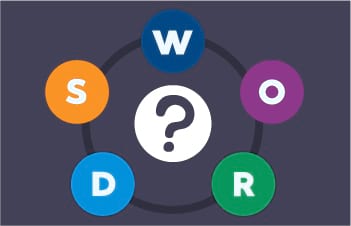 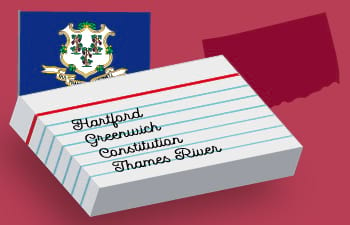 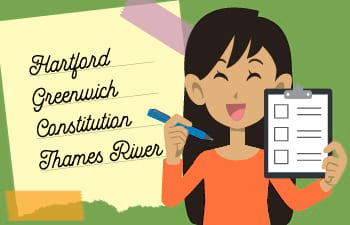 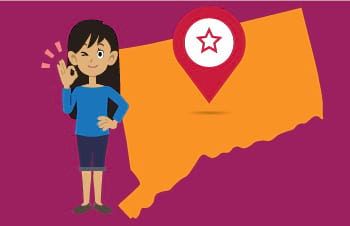 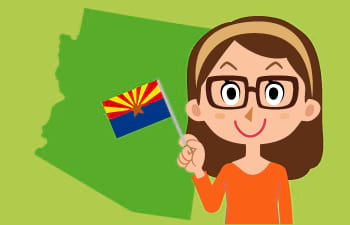 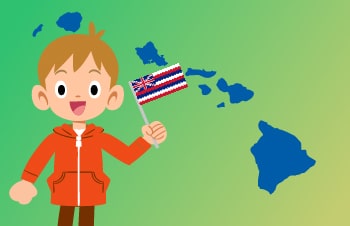