In the spring of 2016, students at an elementary school in Broward County Public Schools in Florida participated in a math fact fluency study over the course of 101 days. The study was set up to compare Reflex, an online individualized game-based math fact fluency system, to traditional classroom methods for teaching math fact fluency.

The study included 139 students in grades 2 and 3. At each grade level, two classes used Reflex and the other two classes used different strategies such as flash cards, timed tests, the program TenMarks, and worksheets to learn their math facts.

The Broward County Public School District is located in metropolitan Fort Lauderdale, approximately 30 miles north of Miami. It is the sixth largest public school system in the United States. The elementary school in Broward where the study took place is a minority-majority school. 57% of its second- and third-grade students are Hispanic or Latino, 31% are Caucasian, 28% have low English proficiency, and 17% are on free or reduced lunch.

The median Reflex student spent 58 minutes a week using the system, which included any time spent on it outside of class. Teachers in non-Reflex classes reported that their students spent between 50 and 280 minutes a week (counting time in class and at home) developing math fact fluency.

Students were tested on their fluency with math facts based on the Florida Standards requirements for their grade level, which are identical to those in the Common Core Math Standards.

Paper-based tests were used to measure the fluency of each student before and after the study. Three 1-minute tests were given at the beginning and again at the end of the study. The results from the three tests at the beginning were averaged to make the pretest score. The three tests at the end were averaged to make the students’ post test score. In the tests, students were scored on both their speed and accuracy. A student’s raw fluency score was calculated as the average number of correct digits minus the average number of incorrect digits across these three tests.

Two of the eight 2nd and 3rd grade classes were largely composed of high-achieving/gifted students; the results excluding those classes may be of particular interest. Across the remaining six classes, users of Reflex gained more than three times as much fluency as their peers. 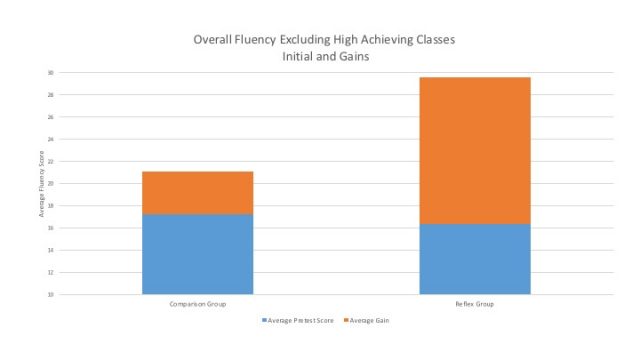 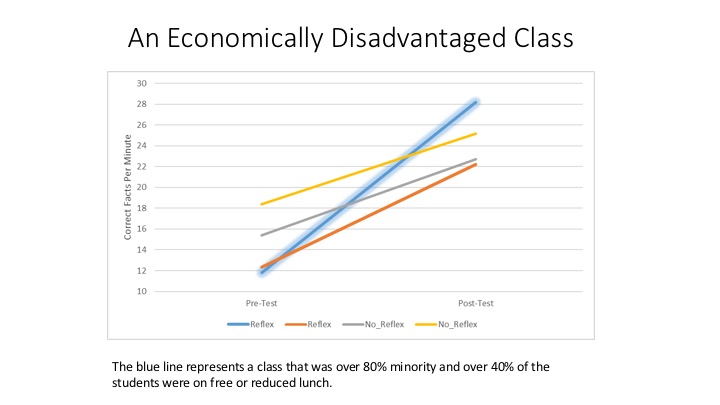 In a 3rd grade class that was 41% free and reduced lunch, 64% female, 82% minority and 12% low English proficiency, students using Reflex were able to improve their test scores from 11.8 correct facts per minute to 28.18 correct facts per minute, passing the other classes labeled as “high achieving/gifted” classes. In this economically disadvantaged class, over half of the students finished in the top quarter of all third graders in the study at post-test.

The class is shown as a blue line, starting with the lowest pretest score and ending with the highest posttest score. The teacher of this Reflex class commented that her students “had more confidence in their fluency and had a positive attitude toward math” after using Reflex.

This article was originally published by ExploreLearning.

Now Is The Time To Get Started

Trusted homeschool solution for over 500,000 families

Now Is The Time To Get Started