If you have children, then more than likely you have LEGO® bricks around the house. I know I do. My kids and I love them! We use them for so many things. But believe me when I say: they are everywhere! My bare feet have had several run-ins with them and it wasn’t pretty. Ouch!

Since 1932, these toys have come a long way. Trained carpenter Ole Kirk Christiansen from Denmark started making wooden toys after losing his job. After his wife died, he created a small wooden toy duck for his sons. When he saw how much they enjoyed the new toy, he started manufacturing them. The name itself comes from the Danish words leg godt, which means ‘play well’.

Today, you can buy LEGO® sets with parts numbering in the hundreds, some into the thousands, to build elaborate creations across various categories and brands. Our family sticks with kits in the double digits for now, but we probably have hundreds of individual parts altogether, and something tells me that number will keep growing. Have I mentioned how much we love LEGO®?

In my house, LEGO® is more than just a building toy that entertains my children for hours on end. I’ve used the bricks to teach my kiddos everything from fractions to multiplication to reading, among other things.

Learning the alphabet
I started teaching my kids the alphabet when they were about 11 months old. To get them familiar with each letter, I would write them out with a marker on individual LEGO® bricks and then say the corresponding letter when they grabbed a brick. As they got older, I would put together all the LEGO® bricks in alphabetical order and have them follow the pattern so they could learn the correct sequence of the letters. To improve their fine motor skills, I would have them create the letter shapes themselves with LEGO® bricks.

Building sounds
This fun game was one of my children’s favorites since it gave them the opportunity to get creative with their LEGO®. I loved it because it would also build their knowledge of beginning sounds. I had them create an item with their LEGO® bricks — an animal, object, person, etc. and then ask them to tell me the beginning sound of the word. As they improved their skills, I would also ask them to use LEGO® bricks to ‘write’ out the first letter. When they were a little bit older, I had them spell out the entire word.

Learning to read words
Once my kids knew the letters of the alphabet and their corresponding sounds, I moved on to teaching them simple, one syllable words like tree, blow, cat, hat, cheek, day, sun, dog, pet, pie. Since each LEGO® already had a letter written on it, I would use them to form words. Then, I would group several words together on the floor and ask my kids to find a particular word. Within a few weeks, they had learned about 25 new words using this method.

Counting syllables
As a child, I learned to count syllables by hand clapping, finger snapping and foot stomping, but as a parent, I went the LEGO® building route. First I gave my children a picture card or a written word, then I had them connect LEGO® bricks to represent the syllables. So the word pencil, for example, had two LEGO® bricks. This was another one of those activities that also allowed them to develop their fine motor skills.

Learning how to spell
The great thing about using LEGO® to teach your kids how to spell is that you don’t have to wait until they are old enough to hold a pencil or grab a crayon. By the time they can draw circles and lines (what they need in order to be able to write a letter), they’ve already built a strong foundation of how letters are written. Some of the first few words that I taught my little ones with to spell with LEGO® bricks were “mom”, “dad” and their name.

Learning the colors
I took advantage of the variety of colors that LEGO® bricks come in to teach my kids this important PreK skill. I would write the corresponding color on each LEGO® and read them out loud each time they grabbed one. This worked so well for them that by the time they started kindergarten, they were masters of colors. They would point out colors when playing with crayons, eating food, grocery shopping, and just about anywhere.

Rhyme time
Rhyming words is always fun, no matter how old you are. I started by writing various rhyming words on small pieces of masking tape and then adhering them to different LEGO® bricks. I would mix up all the bricks in a jar or basket and have my kids connect rhyming words together. One of their favorite rhyming activities was a ‘board game’ we played. I would assemble LEGO® bricks across a building plate and the goal was to use a LEGO® minifigure to jump from one rhyming word to another. Whoever made it across the board first was the winner.

My children are now in elementary school and I can still see that spark in their eyes when they are learning something new and mastering it. Using LEGO® to build their pre-reading and reading skills when they were younger now allows them to associate learning with fun, and I am hopeful this will last a lifetime. 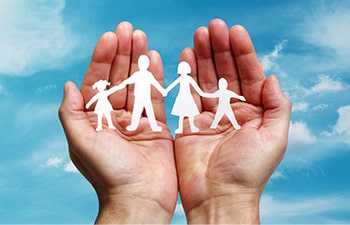 Homeschooling Has Become Safe Haven for Millions of Families