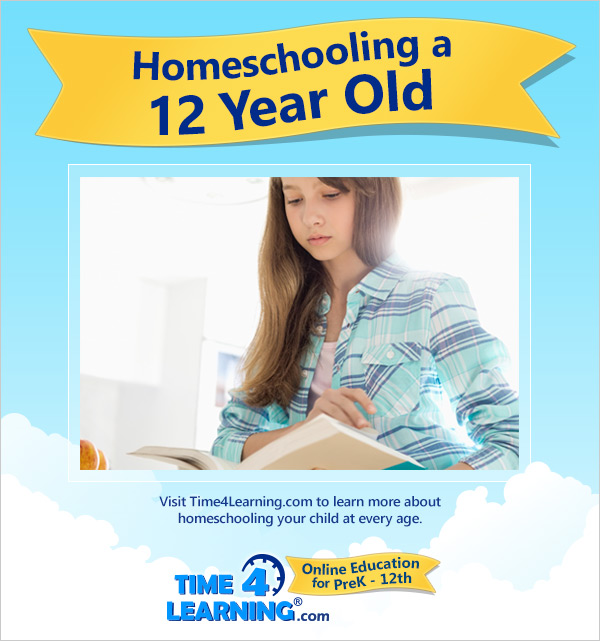 So, you’re homeschooling a twelve year old, congratulations! You are on a grand adventure full of tough choices, important milestones, and shared successes.

While children don’t always develop the same skills at the same age, parents often like to know what to expect from their child in a given time frame. The following information is intended to be a comparison tool, but keep in mind that your child is unique and complex and this information should be considered in the context of your child’s specific development.

When you are twelve years old, the world really is your oyster. In general, twelve year olds are more confident with their decisions, more self-assured, and more motivated than they have been in previous years. While friends are still influential at this age, parental opinion can drop in estimation. Thus, it is not unusual for pre-teens to express opinions completely their own. This is a common year for “rebellion” to rear its head as your maturing child is eager to test their limits and differentiate themselves from the family pack.

Other things that can be common to twelve year olds include:

What To Expect When Homeschooling a Twelve Year Old

Just as it might be if your child were attending traditional middle school this year, twelve year old homeschool can be full of ups and downs. Some parents may feel their child is rejecting their helpful efforts, thus sending their child back to school becomes a serious consideration. What’s happening is fairly simple, though. As they are in most areas of their lives, twelve year olds are testing their limits and making independent choices.

One thing that may improve homeschool power struggles this year is to give your student as much input as possible over his or her learning. Some parents find that a relaxed, or “unschooling” approach to homeschooling can be a welcome change in the middle school years. Allowing twelve year olds to follow their interests and pursue subjects for which they are enthusiastic will often alleviate the tension caused by a heavily structured course of study.

Even if you don’t go the unschooling route, it’s important to let your child work independently on their schoolwork more often in this and following years. This could be a good year to sign them up for 12 year old online homeschool courses so that they have the opportunity to take ownership of at least some of their own learning. Don’t hesitate to take advantage of this increased desire for independence. Start allowing your child to take more responsibility for their own self-care, such as learning to do their own laundry and repairing their own clothing.

What Twelve Year Olds Are Learning About

Have you ever stared at that bright yellow bus driving down the street and wondered what the kids your child’s age were doing when they reached their classroom? In traditional education settings, twelve year olds are exploring a wide range of new information. Age twelve is a common year to learn about:

One thing many twelve year olds have in common is their love for computer-based learning. In fact, you may already be having a difficult time pulling them away from their favorite online games or apps. This is one reason Time4Learning is a natural choice for twelve year old homeschooling online. The lessons in the Time4Learning curriculum are multimedia, interactive, engaging, and keep kids enthusiastic about their homeschool day.

NOTE: This website provides information of a general nature and is designed for information and educational purposes only and does not constitute medical or legal advice.

Trusted homeschool solution for over 500,000 families