Time4Learning is an online student-paced learning system covering preschool through middle school. It is popular as a third grade homeschool curriculum, for afterschool enrichment, for remediation, and for summer study.

Describe the period known as the Viking Age, including dates, deeds, and exploration of the Atlantic Ocean. Explain the Scandanavian expression, ”to-go a-Viking,” and name some notorious activities and personality characteristics attributed to the Vikings. Describe the Viking warrior, including his armor, weapons, battle strategies, and tactics.

Explain the reasons the Vikings traveled by sea to other lands and the navigation methods used by the Vikings to determine directions and locations. Identify the kind of ship used for battle, and explain what made the ship sail at a fast speed.

Describe the role and importance of shipbuilding in the lives of the Vikings. Compare and describe the occupations of the majority of Vikings with the Viking warriors.

Describe the culture of the Vikings, including family life, food, clothing, literature, recreation, artistry, and burial customs. Explain the role of religion and the worship of the gods, Thor, and Frey.

Describe the region of the Alaskan Inuits, including land, climate, population, and environment. Estimate the number of years of habitation of the northwest coast or arctic homeland.

Explain why the region of Alaska is often called the “Land of the Midnight Sun.”

Explain why the Inuits were once called Eskimos, and know the various meanings of the word Eskimo. Identify the language of the Inuits and how words were constructed.

Describe the traditional way of life for the Inuits. Include food, clothing, hunting and fishing, travel, recreation, and art.

Describe the family life and group life of the Inuits. Identify rules of conduct, how disputes were settled, how children were treated, and how future marriage partners were chosen.

Investigate and describe the various shelters in which the Inuits lived, including tents, sod houses, and snow houses. Identify how these shelters were constructed.

Compare and contrast the traditional ways of the Inuits with their present ways of life. Include food, clothing, housing, employment, education, and values.

Demonstrate the ability to use the following geographic terms: harbor, island, bay, peninsula, gulf, ocean, coast, region, and mountain. Locate and label examples of each on a map, and write definitions of the terms.

Locate Alaska on a map and globe. Describe Alaska’s position relative to the rest of the continental United States. Locate and label the Gulf of Alaska and the Bering Strait.

Use a map to locate the Rocky Mountains from New Mexico through Canada to northern Alaska.

Use a world map to locate the region of Europe that was once known as Scandanavia. Identify and label the three countries as they are now known (Denmark, Norway, and Sweden).

Chapter 4: “Exploration of the Americas”

Identify several reasons that Europeans were willing to endure many hardships to explore and settle in new lands. Include the search for wealth, the desire to explore, the search for trade routes, new navigation methods, and religious missionary work.

Describe Christopher Columbus’s first journey to America. Identify the names of his three ships, the land he had mistakenly named India, the name he gave native people, and the day of his landing.

Describe the 1539 Spanish expedition led by Hernando de Soto to Florida. Include the battle with the Cherokee Indians and how de Soto was associated with the Mississippi River. Identify how de Soto died and where he was buried.

Describe the founding of St. Augustine in 1565 and its heritage as the oldest city in the United States.

Describe the searches made by John Cabot and Henry Hudson for the Northwest Passage. Identify and locate the regions they found and the dates of their discoveries. Describe the hardships they encountered and the contributions they made to their countries.

Identify the early Spanish explorers in the lands that are now the states of Texas, New Mexico, Arizona, and California. Describe the contributions each of the explorers made.

Identify various U.S. missionary settlements (especially those in Texas and California). Explain why the Spanish government sent missionaries to the southwestern part of what is now the United States. Explain who Padre Junipero Serra was. Describe life in a mission. Include what services missions provided for Native Americans, and what leaders of missions expected in return from Native Americans.

Explain why Francisco Vásquez de Coronado organized an expedition to the Southwest in 1540. Describe the legend of the ”Seven Cities of Cibola.” Locate and label the areas: Grand Canyon and the Rio Grande.

Identify the region in which the Pueblo lived, the associated tribes (Hopi and Zuni), and the crops grown by them. Explain the conflicts between the Pueblo and the Spaniards.

Chapter Test: Exploration of the Americas

Define colony. Use a map to locate and label the thirteen English colonies. Differentiate each colony by region: New England Colonies, Middle Colonies, and Southern Colonies.

Describe the two major changes, religion and economics, in England that caused the great interest in establishing the English colonies.

Explain how the first colony originated in Jamestown, Virginia (in 1607), and the role John Smith played. Describe the period known as the ”Starving Time.” Explain how land ownership and growth of tobacco crops were major reasons for the survival of the Jamestown economy.

Retell the legend and history of Pocahontas and John Rolfe. Explain their roles in the clashes between Native Americans.

Describe the beliefs held by Puritans. Explain why some Puritans were called Pilgrims, and why, in 1620, the Puritans left Europe for Massachusetts.

Explain several reasons why European colonists moved to America. Include the search for good farmland, trade opportunities, and religious freedom.

Explain the 1637 conflicts between Puritans and Native Americans. Describe the reasons for King Philip’s War (in 1675).

Identify the founders and dates of the following colonies: the Carolinas, Georgia, New Jersey, Delaware, and New York. Explain why the purchase of Manhattan Island was the most profitable land purchase in history.

Explain slave trade in the Southern Colonies and its economic impact. Explain the differences between indentured servants, and slaves as property. Describe the voyage known as the Middle Passage and its conditions for captured Africans.

Describe the establishment of the Plymouth Colony by the Pilgrims Include discussion of: the importance of religious freedom, the voyage of the Mayflower, the 1620 Mayflower Compact, and the first Thanksgiving. Explain why the Plymouth Colony was taken over by the Massachusetts colony.

Identify your community as rural, urban, or suburban. Identify the general features of each of these communities as related to size, density, and grasslands.

Compare and contrast these different types of communities in the United States. Locate each type of community on a U.S. map.

Describe the relationship between people and their environments in rural, urban, and suburban communities.

Describe the various landforms and bodies of water that may be found in rural, urban, and suburban communities.

Identify the natural resources in your community. Describe ways in which people can protect these resources.

Describe how rural, urban, and suburban communities have developed and changed over time.

Explain why people earn, save, and spend money.

Describe how people in the United States are dependent upon other countries for goods (products). Explain the interdependence of people and products in your community.

Describe the differences between employer and employees and the responsibilities and duties of each.

Explain the different ways people can use banks: to save and to borrow money. Explain why banks charge interest to the borrower.

Name the natural resources and the goods produced in your local region.

Distinguish between imports and exports.

Identify the various ways that goods are produced: agriculture, manufacturing, mining, and trade.

Explain why all communities and states have governments and laws. Identify some laws in your community.

Explain what a town meeting is, what issues may be discussed, and how decisions are made. Identify some issues in your community that need to be addressed.

Explain why it is important for people to take part in local government by voting. Describe ways in which you have participated in voting at home, in school, or within groups and organizations.

Identify leaders who have made a difference in the development of your community. Describe the contributions they have made.

The learner will understand the concept of time and chronology by reading and constructing timelines.

Describe historical times in terms of years, decades and centuries.

Other third grade subjects and topics:

I want to Learn More about Time4Learning’s homeschool curriculum or how to use the program for afterschool enrichment. 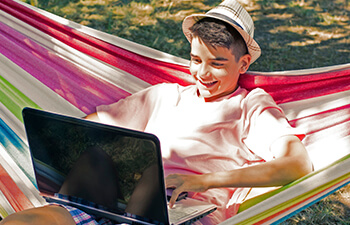 Can an Online Summer Program Benefit Your Child? 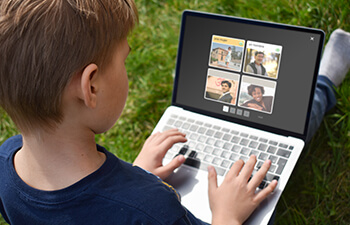 Learn a Foreign Language This Summer!